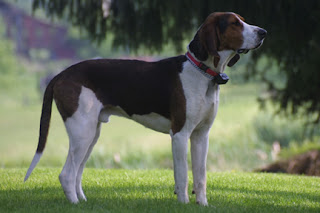 Beau
I remember walking with my dogs one morning, leaving the enclosed dog park and heading back to my car which was about 200 yards away. Ellie, my then seven-year-old Blue Tick Coonhound, raced around happily, tail wildly whipping about, like an oscillating fan out of control. She wasn’t always like this, though… When I got her from the dog pound two years earlier, she was reclusive, fearful and aloof. It turns out she had been terribly abused, and was particularly cautious around men. But she and I bonded quickly, and today she rarely needs to be on a leash, especially in rural areas. While she is much happier now in her life, she still remains cautious, and if there’s something loud or unfamiliar in the distance, she quickly runs back to my side for safety.
Beau, on the other hand, was entirely different. He was the Will Rogers of the canine world: he never met another human or animal he didn’t like… or at least, who he didn’t wanted to play with. He was a two-year-old Tree Walker Coonhound, also a rescue dog, and had absolutely no idea how big he was (120 pounds) nor how intimidating he could appear when he came charging at you like a freight train, with ears, jowels and tongue flapping madly with each bound and stride. Because of his, ummm..., “enthusiasm,” Beau needed to be on his leash as we walked back to the car. Otherwise, he might knock someone over, trample a smaller dog, give a heart attack to a cat, or—and this was my worst fear—accidentally get hit by a car.
As we walked to the parking lot, I felt a slight sadness for Beau… Ellie got to romp freely, but he was restricted. I looked at him lovely, wanting to say, “I wish I could let you run free, big guy, but I’m afraid you have the good sense of a stump…” So I just continued to look at him and marveled at what a miracle he was.
And then something dawned on me… There was a slight tension on the leash as he pulled me forward ever so gently. His long tail swished nobly back-and-forth in a slow but steady wide arc. Every so often, he looked back at me, as if to say, “Just checking.” Ellie, who seconds ago was twenty yards ahead, raced back to us and growled invitingly to him… “Come catch me!” she taunted, and then raced off hoping for pursuit. But Beau didn’t flinch. He led me unerringly back to my car, waited for me to open the door, and then happily hopped right in.
And what I realized was this:
He didn’t see his situation the same way I did. I thought I was controlling him, and protecting him from potentially hurting himself and others (which I was). But he viewed it differently: to him, he was simply leading me safely to our destination. Dogs, unlike humans, are happiest with two things: being with their Master, and being useful. Whereas I thought Beau might be jealous of Ellie’s freedom, that I was treating him unfairly and stopping him from having fun, he seemed to be viewing his situation with the seriousness of receiving a high honor. And what’s more honorable to a dog than being with his Master and having a job to do?
There’s a technical term for what I did here: anthropomorphism. It’s where one assigns human characteristics and feelings to an animal or inanimate object: a “happy” tree, or a “conniving” bird, for instance. But at a deeper level, an anthropomorphism is, as psychologists would say, a type of projection… where we have very personal responses to something that is happening, not to us, but to another person or creature. I would be sad, after all, if I were a dog on a leash.
So why didn’t Beau feel the same way? Because he was a dog, that’s why. And isn’t is amazing that he was so totally fulfilled—and good at—being a dog? Would that I was as good at being a human being!

Posted by Micah Rubenstein at 7:37 AM

Micah Rubenstein
I am never bored. In fact, even as a little boy my mother used to call me "busy fingers." I believe, given this amazing and curious world in which we live, that there is absolutely no reason ever to be bored.