Several weeks ago, a colleague and I were discussing the pros and cons of the Kindle Fire vs. the Apple iPad.  For me, the biggest problem with the iPad is that Apple refuses to include technology that will play Adobe Flash movies. This is a bummer because 30%-40% of the websites in the U.S. and Canada incorporate Flash technology. And that number jumps to almost 70% in countries like China and Turkey. 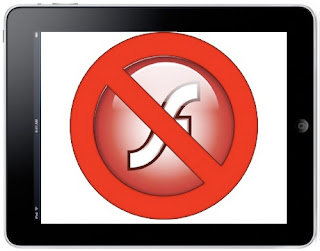 Yes, I understand why Apple decided what they did: mobile computers have to be miserly with any mobile device memory, processing speed and battery life.  Apple doesn’t allow Flash movies to play on its mobile devices (iPhones and iPads) because one would have to download Adobe’s Flash Player, and this would slow the device down, and use up precious memory and battery life.  They do allow it, though, on their iMacs and laptops.
It’s a bummer, though, when you’re surfing on an iPad and most websites you want to view come up with blank spots. Yet the drawbacks of Flash technology didn’t seem to stop other mobile device manufacturers from incorporating Flash Players into their mobile devices.
My colleague defended Apple’s choice by saying, “Even though we think we want access to Flash content, it’s important that Apple reminds us that our user experience would be compromised if the device allowed it.”
Wow…. I simply thought Apple was making a technical decision by not incorporating Flash on its mobile devices.  But my colleague’s comment brought this to a whole new philosophical—and ethical—level.   Shouldn’t I be the one who decides what technical compromises I’m willing to live with in order to be able to have access to Flash content?  And it’s important to note that for most people, it’s a non-issue; most users won’t even notice any difference in device performance.
But Apple seems to know what’s better for us.
I have an Epson wifi printer at home.  I can be browsing the web on my Droid Global2 phone, find a page I want to print out, hit a button and it’s printed out.  When I try to do that with my iPad, though, the device tells me that it can’t find any Apple Air network printers.  It doesn’t even indicate that there’s an Espon network printer available.  Hmmm….. So I guess in addition to Flash, Apple doesn’t want me to be able to connect to any device that isn’t Apple-approved technology.
Well at least they’re consistent!
At this point, I can’t help thinking that Apple’s motivation is to preserve the “purity” of the Apple experience.  That’s fine, as long as I can use the technology for the purposes I need.  But it’s not fine when it becomes limiting.  There are a lot of different types of dark chocolate out there, and some taste much better than others.  But when push comes to shove, one can use any brand of dark chocolate in recipes that call for dark chocolate.  Not Apple mobile devices, though.
It bothers me a lot that Apple seems to think that how I want to use the technology is less important than how they think I should want to use it.
This is scary, folks.
Posted by Micah Rubenstein at 1:03 PM No comments:

Micah Rubenstein
I am never bored. In fact, even as a little boy my mother used to call me "busy fingers." I believe, given this amazing and curious world in which we live, that there is absolutely no reason ever to be bored.